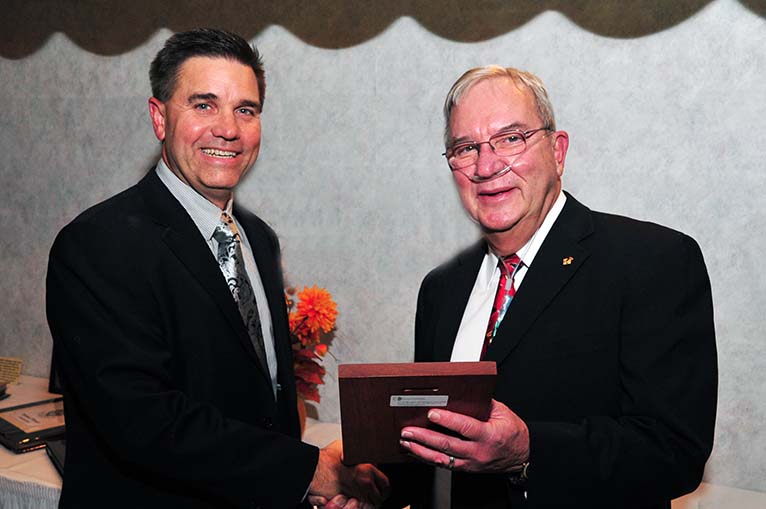 Devon Beer, President and COO of Freshway Food, was recently inducted into the Triangle of Honor by the Sidney/Shelby County YMCA, during the organization’s Heritage Club Celebration. The Triangle of Honor is the highest form of recognition the Sidney/Shelby County YMCA can bestow on individuals. The award serves as a collective “thank you” from all members past and present for the significant impact the honorees have had on the YMCA, through volunteer service, philanthropy or staff leadership.

“I have served on the YMCA board with Devon. His leadership abilities and character are core reasons why our community continues to be a great place to raise a family,” says Phil Gilardi, Owner of Freshway Foods. “Devon has the ability to bring out the very best in people,” Phil adds. “Our community and our company is very fortunate to have people like Devon leading and motivating others.”

Devon has been a member of the YMCA for nearly 40 years, and has served as a volunteer for over 25 years in numerous capacities, including youth sports coach, Health Enhancement Committee Member, YMCA Board Member (12 years), YMCA Board President (2001-2003), and, most recently, Chairman of the YMCA Foundation Board of Trustees. Devon and his wife, Sandy, are loyal and generous supporters of the YMCA mission and are members of the YMCA Heritage Club. Devon’s leadership moved the YMCA forward by leaps and bounds to the point that the Sidney/Shelby County YMCA is recognized across the country as a Premier YMCA.

“The YMCA’s Christian based values and inclusive nature provide an essential foundation for the betterment of a community,” Devon says about the organization. “Our YMCA certainly improves the lives of people in Shelby County.”

Devon is the 18th member inducted into the Triangle of Honor over the past 50 years. Please join us in congratulating Devon on this prestigious honor.