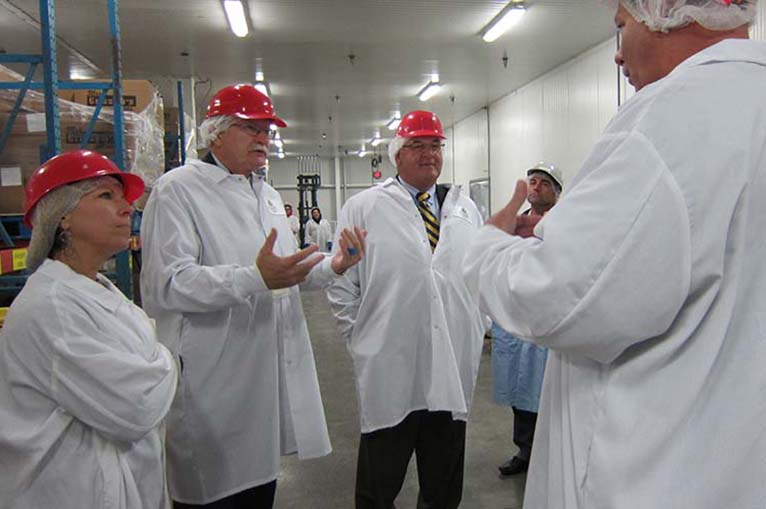 The Sidney/Shelby County area is fortunate to have both governmental and organizational leadership that understands the importance of manufacturing jobs to our region, and Manufacturing Day offered an opportunity to invite these leaders to our facility to celebrate.

Sidney Mayor Mike Barhorst kicked off the event by reading a proclamation from the City of Sidney. The proclamation read:

“Whereas: for generations, manufacturing has played a critical role in Sidney’s diverse economy; and

Whereas, fabricated metal, air conditioning compressors, food products, automotive components, recreational vehicles, plastic containers, and an array of other products are all produced in Shelby County; and

Whereas, Sidney/Shelby County is home to two of the top three manufacturing employers in the Dayton Region; and

Whereas, Sidney/Shelby County experiences a net inflow of over 5,000 workers each day, paying local taxes, purchasing local goods and services; and

Whereas, Sidney/Shelby County has the highest percentage per capita of manufacturing employment of all counties in the State of Ohio, with nearly 40% of the jobs manufacturing related; and

Whereas, Sidney has more manufacturing jobs per capita than any other city in the State of Ohio; and

Whereas, as one of Sidney’s largest employers, Freshway Foods supplies fresh-cut produce, retail salad kits and snacks for school children, daily helping to feed more than a million people.

Now, therefore, I, Mike Barhorst, Mayor of the City of Sidney, Ohio, in recognition of the nationwide celebration that occurs annually on the first Friday in October does hereby proclaim October 2, 2015 as

in the City of Sidney and urge all our citizens to celebrate and explore the many local career opportunities in the manufacturing industry.

In Witness Thereof, I have herunto set my hand and caused the seal of the City of Sidney to be affixed this 2nd day of October in the Year of Our Lord, Two Thousand, Fifteen.”

After the reading of the proclamation, Freshway Foods company president Devon Beer shared information with the group about Freshway’s manufacturing operations and market focus. This was followed by a question and answer period, and a discussion of key City of Sidney initiatives and their impact on Freshway’s operations.

Steve Collins, Project Manager for Freshway, led the group on a tour of our production facility. He showed the group several recent improvement that have been made to our facility as a result of our continuous improvement activities.

After the plant tour, the group had the opportunity to sample some of Freshway’s retail salads, including our Apple Rutabaga Salad, Sweet BBQ Chicken Pasta Salad, Super Veggie Detox Salad, Tangy Orange Fruit Salad and Summer Cole Slaw. We enjoyed celebrating Manufacturing Day with our local leaders, and sharing with them our commitment to manufacturing in Sidney/Shelby County.