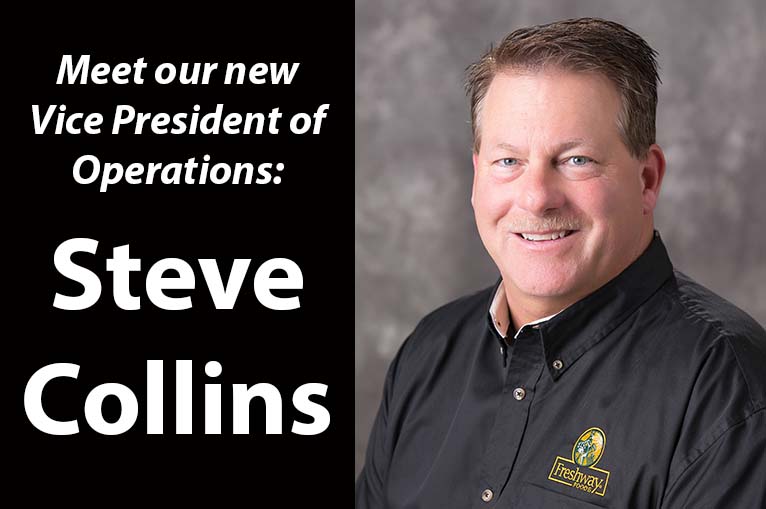 We are pleased to announce that Steve Collins has been named Vice President of Operations for Freshway Foods. In his new role, Steve will lead daily operations at our production and distribution facility in Sidney, Ohio. Steve is replacing Larry Schultz, who will be retiring in early 2016.

Steve joined Freshway Foods in 2014 as Project Manager. In that role, he championed strategic projects, including implementation of the Red Zone Continuous Improvement Progam. Our company president, Devon Beer says, “Steve is a very strategic- and process-oriented leader and a great developer of people.”

Steve has worked hand-in-hand with Larry Schultz over the past year to prepare for this transition. “We have been executing this leadership conversion for a year now to ensure a seamless transition for our customers,” says Devon. “Steve is committed to our values, mission and vision and is well-prepared for this new role,” he adds. “Our customers can expect the same level of commitment to deliver great products and services.”

Larry Schultz led Freshway’s operations for over a decade. “Under Larry’s leadership, our operations team has successfully integrated hundreds of additional SKU offerings and incorporated the latest technology to improve food safety and operational efficiency,” says Devon. “This has allowed us to be very nimble in meeting the changing needs of our customers,” he adds. Larry will continue to work on strategic projects for Freshway until he retires in early 2016.

Please join us in welcoming Steve to his new role!