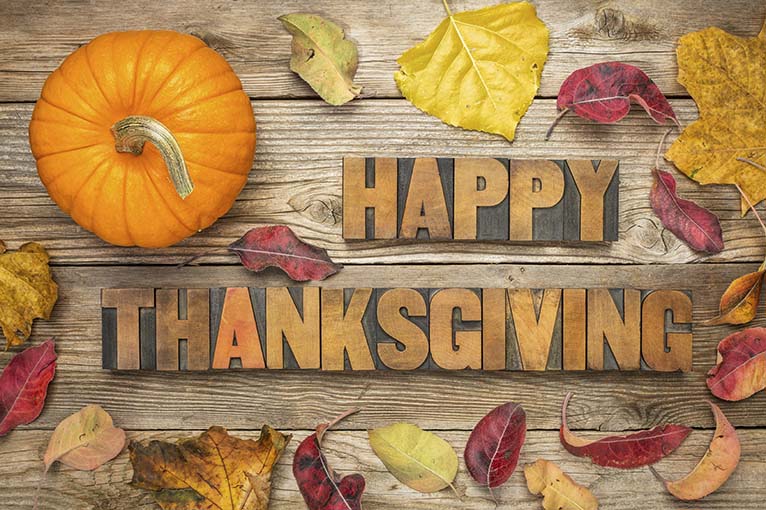 As we prepare to celebrate Thanksgiving with family and friends, we thought it would be interesting to look back at the first Thanksgiving celebration, when the Pilgrims and Wampanoag Indians met at Plymouth in 1621 for a harvest celebration.

Most of us will enjoy turkey for our Thanksgiving dinner. Although we do not have a specific list of the dishes served at the first Thanksgiving celebration, it is possible that turkey was on the menu. Wild turkey were plentiful in the region, and according to the journal of Pilgrim Edward Winslow, the governor of the colony, William Bradford, sent four men on a “fowling” mission. In addition to turkey, it is possible that duck, geese, swan or even passenger pigeons were served.

Wildfowl was not the only meat on the menu. King Massasoit of the Wampanoag arrived at the celebration with five deer as gifts for the Pilgrims. The colonist also may have enjoyed eels, lobster, clams and mussels that were abundant in the area.

Fruits and vegetables were almost certainly a part of the feast, as the first Thanksgiving was a celebration of the colonists’ first autumn harvest. Fruits and vegetables grown by the Pilgrims may have included onions, beans, lettuce, spinach, cabbage, carrots and peas.

The Wampanoag Indians grew flint corn, a type of multicolored corn, which was their staple crop. The corn would have been ground into corn meal, boiled and pounded into corn mush or porridge. They also grew beans, pumpkins and squashes, and ate fruits that were indigenous to the region, including blueberries, plums, grapes, gooseberries, raspberries and cranberries.

One vegetable you would not have found at the first Thanksgiving is potatoes, which were new to Europe, and not available in North America at the time.

Although pies (often containing meat) were popular at the time, it is unlikely that the first Thanksgiving feast included pie. The colonist didn’t have butter and wheat flour to make pie crusts, and the sugar that they brought over on the Mayflower would have been depleted by that time. In addition, the colonists had not yet constructed an oven for baking. The Pilgrims may have improvised by hollowing out pumpkins, filling the shells with milk, honey and spices to make a custard, and roasting the pumpkins in hot ashes.

We will celebrate with our family and friends for a meal on Thursday, but the first Thanksgiving celebration lasted for three days!

All of us at Freshway Foods wish you and your families a Happy Thanksgiving!

For more information about the first Thanksgiving feast, we encourage you to check out these excellent articles from the Smithsonian Magazine and the History Channel.